Chevron, the loser in the Anadarko buyout battle, is actually a winner on Wall Street

Occidental Petroleum may have spoiled Chevron’s plans to acquire oil and gas driller Anadarko Petroleum, but Wall Street is not pronouncing the oil company the loser in the buyout battle.

Several analysts are commending Chevron for declining to counterOccidental’s $38 billion bid for Anadarko. Chevron not only walks away with a $1 billion breakup fee, but showed investors it won’t sacrifice its budget sheet in a bidding war, the analysts say.

The San Ramon, California-based energy giant was under pressure to hike its original $65 per share offer into the $70s after the underdog Occidental sweetened its offer this week. For Occidental, funding a $76 per share bid relied in part on agreeing to a steep 8% annual payout to Warren Buffett in order to secure a $10 billion investment from the Oracle of Omaha.

WATCH NOWVIDEO03:48Cramer: Chevron walking away from Anadarko is good for all parties

“Winning By Not Overpaying” is how Wells Fargo analyst Roger Read summed up Chevron’s decision.

The outcome is ultimately positive for Chevron because executives proved to investors that they prioritize capital discipline and shareholder returns. Chevron also built goodwill by sticking with plans to raise its share buyback program by 25% to $5 billion per year, even though the increase was originally tied to the Anadarko deal, Read notes.

Shares of Chevron were up about 3% at roughly $121 on the news Thursday. The stock had tumbled as much as 7% since Chevron announced the Anadarko deal last month. 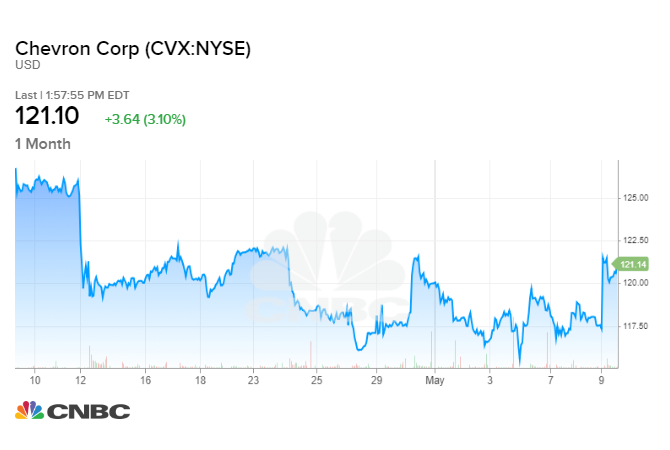 “Chevron did exactly the right thing and walked away, and the client feedback has been raining in positive,” said Paul Sankey, lead oil analyst at Mizuho Securities. “The generalists particularly hated that the last decently performing sector in energy — mega-cap oil — was potentially losing its capital discipline.”

According to Sankey, Chevron stood little to gain by countering Occidental’s offer, except inflicting damage on its rival by forcing Occidental to increase its own bid. Instead, Chevron kept its “hard-won” reputation for capital discipline intact, Sankey said.

To be sure, by purchasing Anadarko, Chevron stood to gain valuable assets in the Permian Basin, the top U.S. shale oil region, as well as in the Gulf of Mexico and the growing liquefied natural gas market.

“Losing Anadarko probably stings a bit, given how strong a fit those assets were for Chevron. But it has a great existing asset base and a runway for growth, so I don’t see any pressure to turn around and do another deal out of the gate,” said Andrew Dittmar, a mergers and acquisitions analyst at energy analytics firm DrillingInfo.

WATCH NOWVIDEO04:30Chevron will not increase its offer for Anadarko

Prior to Thursday’s announcement, investment bank Stifel predicted that Chevron would walk away from the Anadarko deal. Paying up for the driller didn’t make sense so long as cheaper targets like Concho Resources, Parsley Energy, Pioneer Natural Resources and Cimarex Energy remain available, according to Stifel analyst Michael Scialla.

Pavel Molchanov, equity analyst at Raymond James, thinks Chevron will remain on the hunt for acquisitions, but says the company doesn’t need to do large-scale dealmaking. Instead of buying another company, he thinks Chevron should buy individual assets that enhance its existing portfolio in the Permian and elsewhere.

Molchanov reiterated his outperform rating on Chevron on Thursday. He expects Chevron to grow its oil and gas production by 5% in 2019 and 1.7% in 2020, even without doing deals.

“With this needless complication in the rearview mirror, investors will be able to refocus on Chevron’s underlying fundamentals — of which we remain fans,” said Molchanov, who argued neither Occidental nor Chevron should have pursued Anadarko.