Robust demand for Texas oil and gas in the first two months of 2019 pushed the state’s export activity into high gear: triple the national rate and contrasting with a slight decline by California.

The Lone Star State’s exports totaled more than $50.9 billion in the January-February period of 2019, increasing 9% from a year earlier, according to WISERTrade, a trade research firm. For California, total international sales dipped 1% to $28.1 billion in the two months compared with national export growth of 2.6% to $260 billion in the period.

Texas represented nearly 20% of all U.S. exports in the January-February period while California accounted for about 11%. California has seen its share of total U.S. exports fall in recent years while Texas has been growing its share due mainly to the new oil boom.

“Two-thirds of the U.S. increase in exports over these last two months have come from Texas,” said Michael Cox, a former chief economist for the Federal Reserve Bank of Dallas and an executive in residence at Southern Methodist University. “And 99.4% of that is oil and gas.” 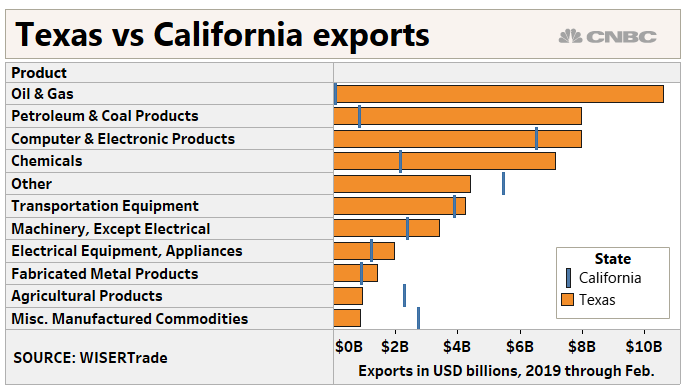 Oil and gas exports from Texas rose 45% in value in the first two months of 2019, and petroleum and coal products grew by 5%. One laggard was agricultural products, which fell about 22%, reflecting a drop in oilseeds, grains and other farm-related products.

Mexico, which bought $17.4 billion worth of products from Texas during January and February, remains the leading export sales destination followed by Canada.

Texas’ agriculture exports to Mexico were up 9% in the first two months of 2019, but there was weakness from sales of meat and dairy products. In response to President Donald Trump’s steel and aluminum import duties, Mexico and Canada last year imposed tit-for-tat tariffs on a variety of U.S. food and agricultural products, including pork and some dairy items. 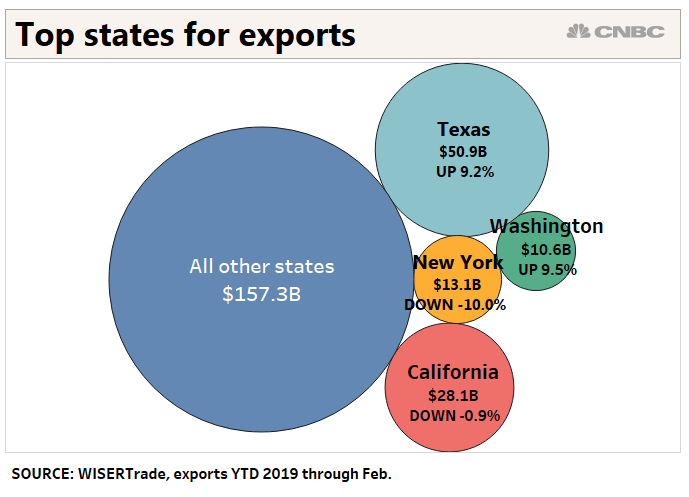 As for China, Texas saw its total exports to the world’s second-largest economy fall by 52% to $1.6 billion in the first two months of the year, with the agriculture trade portion plunging 85% in value.

Similarly, total U.S. agricultural exports to China were sharply lower in January and February, falling by 48% during the two months, according to WISERTrade. It followed Beijing last year imposing retaliatory tariffs on a variety of U.S. farm-related products, including soybeans, grains, meats, cotton, dairy products, fruit and nuts.

U.S.-China trade talks are scheduled to resume next week in Beijing led by U.S. Trade Representative Robert Lighthizer and Treasury Secretary Steven Mnuchin. There were signs of progress in the previous round of bilateral negotiations but hurdles remain, including forced technology transfer and an enforcement mechanism of any final agreement.

Pistachios coming off the conveyor of the specialized nut harvester and into a storage container, Yolo, California.Mardis Coers | Moment Mobile | Getty Images

For California, total exports to China dipped 8% to $2.4 billion in the January-February period while agricultural shipments to the world’s second-largest economy sank 36%. The Golden State’s fruit and tree nut exports to China declined by nearly 44%.

“Exports to China are down, there’s no doubt about it,” said Christopher Thornberg of the Los Angeles-based consulting firm Beacon Economics. “But you’re seeing price effects having more of an impact on the [export] numbers than actual volumes.”

California agricultural commodities such as tree nuts, especially walnuts and pistachios, were among the products that experienced weaker pricing. Up to 70% of California’s tree-nut crops get exported overseas, and some years more than half of the product goes to China and Hong Kong.

Ironically, Iran — a chief competitor to California’s pistachio industry — appears to have played a role in keeping Chinese demand high for some U.S. tree nuts. A significant freeze last spring in Iran killed off a large portion of the country’s nut crop, leaving the U.S.-grown product in higher demand.

“Iran had a small pistachio crop and only exported about 5% of what they normally do,” said Dan Sumner, an agricultural professor at the University of California in Davis. “So prices came down from where they would otherwise be, but we’re still exporting.”

What is Depilation Allowance?

Happy Friday! Let's talk about depression allowance, that may sound intimidating, but it's actually very beneficial to you!

How can a depletion allowance benefit you?