A flurry of oil tanker attacks in the world’s busiest transit lane for seaborne oil shipments has triggered grave concerns about maritime security, with President Donald Trump suggesting the U.S. could stop providing protection to other ships.

Six oil tankers and a U.S. spy drone have been attacked since May either in, or near, the Strait of Hormuz — a strategically important waterway which separates Iran, Oman and the United Arab Emirates.

Trump has since said the U.S. may lessen its role in the Strait of Hormuz, as domestic oil and gas output soars and U.S. energy imports from the Middle East decline.

The suggestion indicates a weakening of a nearly 40-year-old U.S. policy to defend national interests in the Persian Gulf and appeared to contradict White House officials seeking to reassure allies of the U.S. commitment to safe transport of energy through the narrow waterway.

In response to Trump, Japan’s chief cabinet secretary, Yoshihide Suga, reportedly said Tuesday that the safety of shipping in the Strait of Hormuz is “a matter of life and death for our country in terms of energy security and it is extremely important for the peace and prosperity of the international community.”

Why is the Strait of Hormuz so important?

The Strait of Hormuz — located between the Persian Gulf and the Gulf of Oman — is seen as one of the most important waterways in the world, linking crude producers in the Middle East with key markets in the rest of the world. It plays a pivotal role for Asian economies that are heavily dependent on oil imports from the Middle East.

Flows through the narrow channel in 2018 made up about one-third of total global seaborne traded oil. More than one-quarter of global liquefied natural gas trade (LNG) also transited the Strait of Hormuz last year.

Daily oil flow in the Strait of Hormuz averaged 21 million barrels per day in 2018, according to the U.S. Energy Information Administration (EIA). That’s the equivalent of about 21% of global petroleum liquids consumption.

Trump said in a tweet earlier this week that China, Japan and other countries reliant on the world’s most important chokepoint “should be protecting their own ships on what has always been a dangerous journey.”

The U.S. president also claimed China gets 91% of its oil from the Strait of Hormuz, while Japan imports 62% and many other countries likewise.

“So why are we protecting the shipping lanes for other countries (many years) for zero compensation (?)”

“We don’t even need to be there in that the U.S. has just become (by far) the largest producer of energy anywhere in the world,” Trump said.

Donald J. Trump✔@realDonaldTrump....a dangerous journey. We don’t even need to be there in that the U.S. has just become (by far) the largest producer of Energy anywhere in the world! The U.S. request for Iran is very simple - No Nuclear Weapons and No Further Sponsoring of Terror! 114K7:08 AM - Jun 24, 2019Twitter Ads info and privacy

31K people are talking about this

It was not clear what data Trump based his tweet claiming that China imported 91% of its oil via the Strait of Hormuz.

The world’s second-largest economy secured about 44% of its imported crude oil supplies via the Middle East from January through to April, according to China’s General Administration of Customs.

U.S. imports from Middle Eastern countries averaged less than 1.05 million barrels per day (b/d) in March, down from a peak of almost 3.08 million b/d in April 2003, according to the EIA.

Over the same period, oil output in the world’s largest economy climbed to almost 12 million b/d, up from 5.73 million b/d.

Trump’s tweets also appeared to contradict members of his own administration.

U.S. Secretary of State Mike Pompeo met with Saudi Arabia’s King Salman on Monday to discuss regional tensions and the “need to promote maritime security in the Strait of Hormuz.”

“Freedom of navigation is paramount,” Pompeo said via Twitter on Monday. 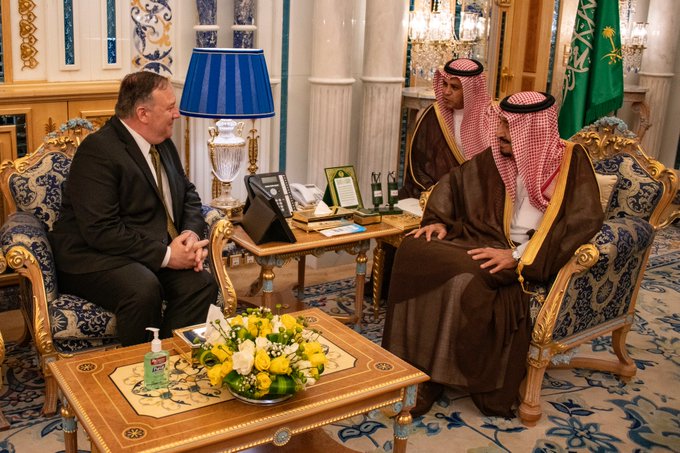 Secretary Pompeo✔@SecPompeoProductive meeting with King Salman bin Abdulaziz Al Saud today to discuss heightened tensions in the region and the need to promote maritime security in the Strait of Hormuz. Freedom of navigation is paramount. 5,9017:38 AM - Jun 24, 2019

3,584 people are talking about thisTwitter Ads info and privacy

Meanwhile, U.S. special representative to Iran, Brian Hook, told CNBC last week that an “international response ” would be required to protect ships traveling through the Strait of Hormuz.

Hook suggested the G-20 forum would be a “good forum” for leaders to discuss maritime security and freedom of navigation.

“That’s a very important principle that countries need to support, not only in words but also in deed,” he added.