US crude rises 23 cents to $53.48, rebounding as stocks rally on Fed comments

Oil prices turned positive on Tuesday, tracking a rally in global stock markets, with Brent crude recovering from a four-month low touched earlier in the session.

Oil’s gains were triggered by the rally in stocks following the Fed comments, said Andrew Lipow, president of Lipow Oil Associates in Houston. 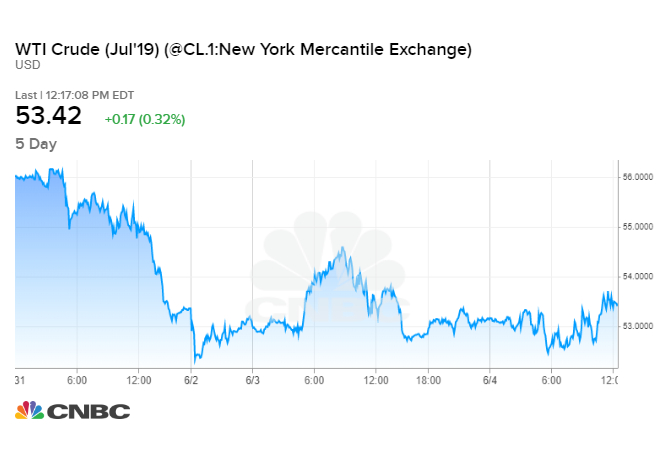 The oil market had been weighed down earlier in the session by concerns about slowing global growth and comments from Russia’s top oil producer that it would oppose extending joint cuts with OPEC until the end of the year.

Financial traders have been selling off energy markets on growing concerns about the outlook for the world economy amid the trade war between the United States and China and U.S. threats of tariffs on Mexican imports.

“As long as U.S. tariff issues with China and Mexico remain unresolved and a broad based 5% tariff is placed on Mexico next week, speculative liquidation out of the oil space could be sustained,” Jim Ritterbusch of Ritterbusch and Associates said in a note.

Oil futures are trading around 20% below 2019 peaks reached in late April, with May posting the sharpest monthly declines since November.

Other energy prices, such as coal and gas, are also being hit hard by the economic downturn.

To prevent oversupply and prop up the market, OPEC, together with allies including Russia, has withheld supply since the start of the year.

The group plans to decide later this month or in early July whether to continue the supply curbs.

WATCH NOWVIDEO02:16Shell CEO: Era of investing in upstream will be with us for some time to come

Saudi Energy Minister Khalid al-Falih said on Monday a consensus was emerging among producers to continue working “to sustain market stability” in the second half of the year.

However, on Tuesday, the head of Russian state producer Rosneft, Igor Sechin, said Russia should pump at will and he would seek compensation from the government if cuts were extended.

Producers are concerned that the economic slowdown will reduce fuel consumption.

U.S. crude stockpiles have also risen last month to nearly two-year highs. However, analysts in a Reuters poll forecast stockpiles to have drawn for the second consecutive week ahead of weekly reports. Industry group the American Petroleum Institute will release its data at 4:30 p.m., followed by the government’s report on Wednesday.

“There is no shortage of crude oil inventories. Unless we see an across-the-board inventory drop, crude and product prices will remain under pressure,” Lipow added.